The tiny planet assignment is a very exciting project. Art 6 spent the quarter exploring Digital Photography.  We started off the year by downloading PS Express (a free Photoshop app for iPhone and iPad). This simple introduction into the world of photo editing and basic functions extended into the Digital Art Lab as students learned to use the program Adobe Photoshop CS6 on an iMac. Students took a series of digital photos, uploaded them to the network using Image Capture, and then stitched together a panoramic shot of a location of their choice on the Allendale Columbia campus. The final step in all of this was to turn their panoramic image into a “Tiny Planet.”

To distribute instruction I use a Learning Management System called Canvas to share directions. Here is what students see when they login. Each assignment breaks down the project into smaller steps that can be completed in about one class period. At the end of the quarter they will have made three pieces, their original PS Express piece using the iPad, their panoramic image, and their tiny planet.

Here are some student examples of the panoramic stage (step 6 above).

Here are some student examples of the final stage, or applying the polarize filter (step 8 above). This filter warps the photo into a sphere creating the illusion that you are observing a tiny planet. 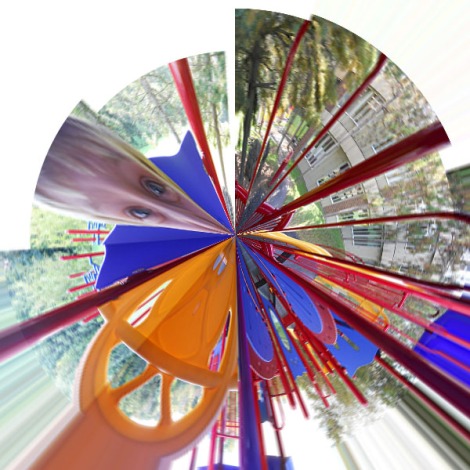 One thing that I don’t tell my students (right away) is that the new iPhone 4S and 5 software is capable of shooting panoramic photos using the camera app. However, I feel it is important for them to be able to create their imagery the “old fashioned way,” and manually “stitch” or compose their photos. There are also apps out there capable of creating similar imagery, for example, the Tiny Planet app available in the iTunes store for $0.99. 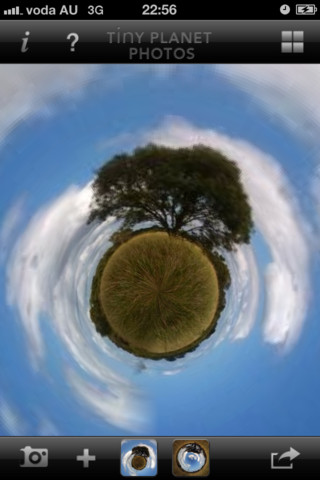 There are even artists out there who make work in a similar style. These Miniature Worlds by Catherine Nelson were featured on one of my favorite art websites This is Colassal. Stop by her site to see more of her spectacularly huge and high resolution images.

Sydney-based artist Catherine Nelson refers to herself as a painter with a camera, in that she doesn’t see the world as a photographer does but instead uses photos as a medium with which she creates these fantastic miniature worlds. Each work is comprised of hundreds of photographs which she digitally stitches together, drawing from an extensive background in visual special effects having worked on such films as Moulin Rouge, Harry Potter and 300. Of her work Nelson says:

“When I embraced the medium of photography, I felt that taking a picture that represented only what was within the frame of the lens wasn’t expressing my personal and inner experience of the world around me. With the eye and training of a painter and with years of experience behind me in film visual effects, I began to take my photos to another level. The ‘Future Memories’ series comprises of 20 floating worlds, meticulously composed with thousands of assembled details. Visual poetry, nature photography and digital techniques blend together to give shape to these transcendental landscapes. The result is a contemporary pictorial mythology that subtly reminds the viewer of a profound truth: that it is in the flourishing variety of the local that the fate of the world resides.”